So how do you adapt to the rapid changes in the SEO industry caused by the updates that Google rolled out? Find out how and why you need to make your SEO pillar as strong as possible. Watch this video as David Jenyns shares why Authority Content is the modern SEO.

Video Transcript: We’re starting to see how the game has changed and why we need to re look at and reshape the way that we’re doing traditional SEO. Up until this point, we’ve now run an event, we’ve created some really great quality content, we’ve now potentially turned it into a product. Now we’re going to take that and repurpose it. 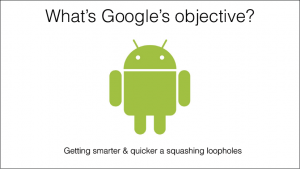 The reason I want to make sure you’re only putting out the highest quality content is because we want to be giving Google what they’re actually looking for. The rules for Google have started to change. Remember, if you think about the objective of what Google is looking to do, they want to serve the best and most relevant content to their users. They want to get them to that information in the least number of clicks. Part of the evolution that we’ve seen is certain industries and sites and websites have slowly started to die off. Because they go against what Google’s objective is.

We’re seeing directory style sites start to disappear. There are still a few rising to the top, things like TrueLocal and Yelp over in the States. A few of those are sticking around because they’ve got past the point of critical mass. But there are other sites where Google is just thinking, do I really want to send someone from my search results page to another web page that just looks like another search results page? Then they’re going to click on that before they actually get through to the content. So we’re starting to see that content die out.

As we started to see different updates when the Penguin and the Panda algorithm got rolled out, I got quite a lot of calls from people in similar spaces who were having the same sorts of issues. I know one particular individual who had a multi million dollar business that he’d built up in the directory space. He was extremely successful, a very sharp operator and he knew exactly what he was doing. He ran his business very well. He had built up a sales team, engaging with them really well, got leads, continued to follow up. But what we started to see was it only worked with organic traffic. The whole business was built on this idea, almost like an arbitrage opportunity. It was the idea that I could get traffic very cheaply over here and effectively resell it over here to the person who wanted to buy my directory listing. 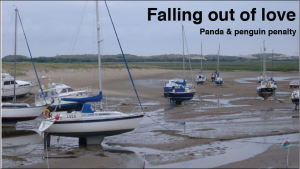 But Google targeted those types of sites as the industry’s changed. I got lot so phone calls like that from people in a similar space. Those sorts of sites started to fall out of love with Google. I’ve seen it where it’s like the tide was there but then the tide went out again. You might have heard when the tide goes out, you see who was swimming naked. It’s like the tide went out and the business wasn’t strong enough to have multiple sources coming in. This is not an isolated situation.

The one I’m thinking of in particular got hit with a Panda update and then got hit with a Penguin update as well. The discussion I got all too often, I got a lot of phone calls when some of these updates came through, was when do I hold it and when do I fold it? I’m in a situation here where I’m building something that and Google doesn’t want to serve up my website in their index anymore. What I’m doing is putting an extra step in there. You need to think about where things are going, you need to make sure that your business stays relevant. You need to understand that industries change over time. If you catch yourself on the wrong side of the tide, you can get left high and dry. 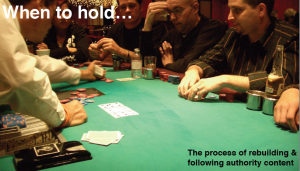 The process – do we hold or fold? We’ve decided to go through the rebuilding process, building out good quality content, authority content. That’s what they went through. It was not a unique situation. I had many of these phone calls. So you want to make sure you think about what you’re building. That’s why I’m all about building authority content and building things that are in line with Google’s objective. Then regardless of what updates come, you’re going to be on the right side.

It’s that idea of what Google is actually looking for. These loopholes that they’re squashing, the speed at which they’re squashing them is getting quicker. The updates are just rolling one after the other. So if you’re trying to play the game of just staying in front of the algorithm, you’re playing the wrong game. We need to change the game that we’re playing. We need to get our objective more in line with what Google is looking to do. Our objective should be to provide relevant and useful content to our end user and client for obvious reasons. Google doesn’t pull out its wallet and make a purchase, your client does, your prospect does. So think about creating and building a business centered around them, as opposed to looking for that shortcut.

A lot of businesses built diving boards, this idea that their whole business was supported by one pillar. They had a diving board and a pillar that supported it underneath was SEO. If that got knocked out, it’s not a very strong business. Not only do we need to build multiple pillars underneath this diving board to make it strong, I also think we need to make each pillar extra strong as well. I’m going to talk about how do we make the SEO pillar as strong as possible?

Is traditional SEO is not as effective as it used to be but it is still a good place to start your online marketing. However, what you should be focusing more on is high quality content. This is where Authority Content comes in. 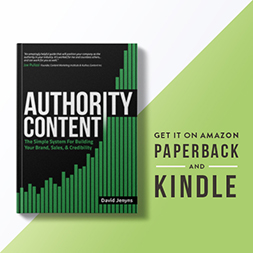